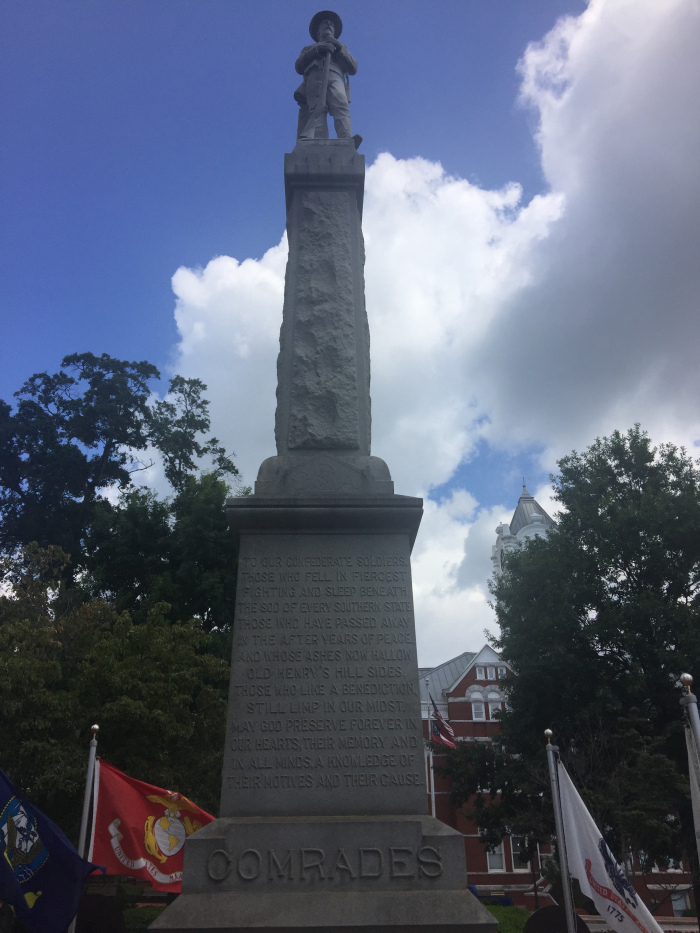 15 Aug This Statue Exalts White Supremacy. Tear it Down. – The Abbott Law Firm

Posted at 15:58h in Uncategorized by OXPI-ADMIN

For ten years, I have practiced law in the shadow of a monument “To Our Confederate Dead.”  It towers smack dab in the middle of the McDonough courthouse square.  The epigraph reads:

“To our confederate soldiers those who fell in the fiercest fighting and sleep beneath the sod of every southern state, those who have passed away in the after years of peace and whose ashes now hallow old Henry’s hillsides, those who like a benediction still limp in our midst, may God preserve forever in our hearts, their memory and in all minds a knowledge of their motives and their cause.”

How very Southern.  What were their motives?  What was their cause?  Why aren’t these things spelled out?

The statute was erected in 1910, while Georgia was in a state of racist hysteria.  In 1906, Atlanta saw one of the deadliest race riots in American history.  The riots began with rumors that four white women had been accosted by blacks, though none of these allegations was ever proven.  For two days, blood flowed on the streets of Atlanta, leaving between two and four dozen African Americans, and two whites, dead.  Throughout that decade, most years saw two or three lynchings in Georgia alone.

Most blacks had been effectively disenfranchised since 1877, when Georgia became the first state to adopt a cumulative poll tax.  A citizen could vote only if he paid the tax for every year he had been an adult.  Fewer than 20% of Georgia blacks voted in the 1900 and 1904 elections.  Despite white economic and political hegemony, Georgia politicians played on white racial anxieties to win votes.  Hoke Smith, governor of Georgia from 1907-1911, proclaimed it would be “folly for us to neglect any means within our reach to resist the present danger of negro domination.”  He championed an amendment to the Georgia Constitution to further tighten voting requirements.  It left the poll tax in place and further restricted the vote to those who: (1) could pass an (arbitrary) literacy test; (2) had served in the U.S. or Confederate military or had ancestors who had done so; (3) owned at least 40 acres or $500 of property; or (4) were of “good character.”  The Amendment, like the epigraph, never mentioned race.  It didn’t need to.  Everyone who mattered knew that light skin was an essential ingredient of “good character.”

The legislative sponsor of this amendment, Thomas Hardwick, openly predicted it “would disenfranchise about 95% of the negro vote—in fact about all of them.”  The legislature passed the amendment overwhelmingly, and the voters who could pay the poll tax ratified it by a margin of 79,968 to 40,620.  As late as 1940, fewer than 5% of adult African Americans were registered to vote in Georgia.

The statute that blots our courthouse square does not state what the “cause” was because that cause had been declared illegal by the Thirteenth, Fourteenth and Fifteenth Amendments to the U.S. Constitution.  These Amendments were still on the books, still the supreme law of the land, but lay dormant after Northern enthusiasm for enforcing them collapsed in the wake of the 1876 election.  They could be evaded but not openly defied.  White supremacy could be and was the essential fact of Georgia politics, as long as it dared not speak its name.

Many of the Confederate dead were poor yeomen bamboozled by their slave-driving betters.  For them, I feel more pity than contempt.  Many, possibly most, of their white grandsons were disenfranchised by the poll tax.  The 120,000 votes that were cast in the 1908 Georgia election represented less than 5% of the total population and only 25% of the adult, white, male population.  The “cause” for which the sons of Henry County fought and died was a narrow one indeed.

The statue needs to go.

If you need an aggressive Criminal Defense Attorney who will stand up for your rights and your interests, give David a call and get your case started today.