When to Take (and When to Refuse) a Breath Test

If you get caught driving while intoxicated, you are in the horns of a dilemma. Taking a blood or breath test will give the state powerful evidence that you were intoxicated. Refusing the test will subject you to additional penalties and could keep you from driving anywhere for a year.

Many DUI attorneys say “never take a breath test.” There is certainly a kernel of wisdom in the “don’t take the test” mantra. If you take a chemical test, and if the test is significantly over the legal limit, your odds a DUI conviction are over 90%. I know experienced DUI attorneys who have never won an acquittal when their client “blew over,” or who have only won such cases when it was unclear that their client drove a car. Fighting a breath test in excess of 0.085% at trial is an uphill fight, though it may be worth fighting such a case if you have a commercial driver’s license or if DUI conviction would destroy your career.  In some courts, DUI charges can be reduced if the result is under 0.100%, the client has a clean criminal history, and there is evidence of rehabilitation.

The problem with refusing a chemical test is that Georgia law punishes this choice. An entire category of legal hearings, Administrative License Suspension Hearings (“ALS hearings”), exists largely to punish drivers who refuse to take chemical tests. If the administrative judge finds that you refused a chemical test, your license will be suspended for at least a year and you will be ineligible for a restricted driving permit. Conversely, if you are convicted of a first-time DUI, you can get your license restored after 120 days and are eligible for a restricted permit in the interim. The consequences of refusing a chemical test don’t end here. If you take your case to trial, the prosecutor will argue that you refused the test because you knew you would fail it. 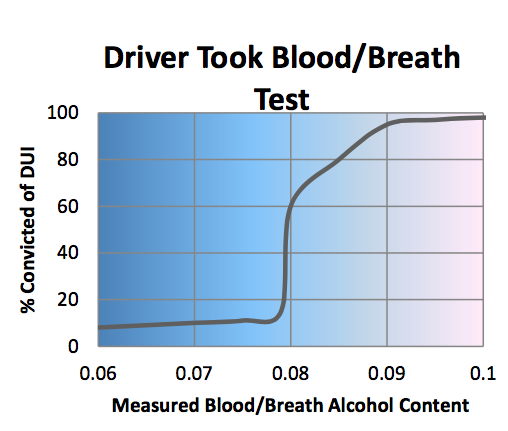 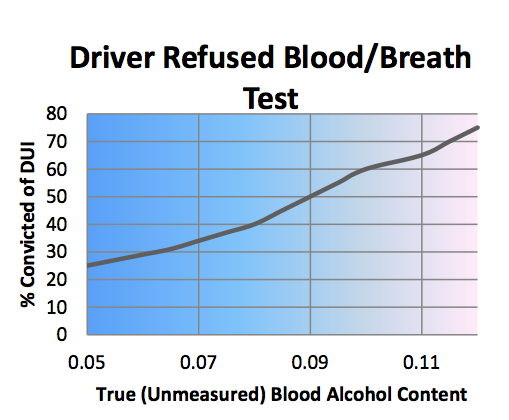 “Take the chemical test if and only if you are likely to pass it.”

My advice is this: take the chemical test if and only if you are likely to pass it. There are complex formulae which can give you a very good estimate of your BAC. The problem with these formulae is they are too complicated for most people to do in their head. The following formula will let you make a pretty accurate guess and requires only simple arithmetic. Ideally, you will do before you get behind the wheel of a car and won’t drive if you are anywhere close to failing. In a pinch, you can run through this formula after you’ve been pulled over.

Take the number of drinks you have had and multiply by five. Then subtract three from this number for each hour since you began drinking. If this number is less than 1/10th of you weight in pounds, you’ll probably pass the test.

If you take the test and “blow under” you aren’t completely out of the woods. The officer will probably take you to jail. This is no different than what would have happened if you refused the test, and you’ll still have to post bond and deal with a court case. However, if you blow under 0.080%, many prosecutors will agree to reduce the charge to reckless driving, especially if you don’t have a recent DUI conviction. Passing a breath test greatly simplifies a DUI case. Because of this, many attorneys, including me, offer lower fees to clients who passed a chemical test.

If you refuse a chemical test, you are in a bind. There will probably be an ALS hearing within 60 days of your arrest. If the administrative judge finds that you were lawfully arrested for DUI and refused to take a chemical test, then you can’t drive anywhere for a year. This is much worse than a first time DUI conviction because the effective suspension period is three times as long and you can’t get a restricted license during this period.

Because the consequences of losing an ALS hearing are harsh, most DUI attorneys do anything they can to avoid these hearings. More creativity goes into finding reasons to continue ALS hearings to the next calendar than goes into actually contesting these hearings. Of course, because administrative judges have heard lame excuses for continuing ALS hearings for years, they rarely grant them. When ALS hearings do occur, the result is predictable: the driver almost always loses.

If you refused to take a chemical test, your best bet is to try to strike a deal at the ALS hearing. If you agree to plead guilty to DUI, many officers will withdraw the allegation that you refused the chemical test. This will avoid the one-year hard suspension that a refusal finding generates. Your driver’s license will be suspended when you plead guilty to DUI, but, if you have not been convicted of a DUI in the past 10 years, you can get your license restored after 120 days and can drive on a restricted permit in the interim.

Defendants who refuse a chemical test and refuse to plead guilty are forced to make a high-risk gamble. Under Georgia law, if you are ultimately acquitted of DUI (or if the charge is reduced to reckless driving), the refusal suspension will be withdrawn. Basically, when and if a jury acquits you, you can start driving again. The problem is the ALS hearing is likely to occur months before your DUI trial. Between the ALS hearing and your DUI trial, it will be a crime for you to drive anywhere. Furthermore, if you are convicted at trial, the judge can sentence you to up to 12 months in jail, even for a first-time DUI. Many judges are reluctant to give a first-time DUI defendant a lengthy jail sentence, but some judges will give virtually any defendant who is found guilty at trial 12 months. Before you risk a jury trial, you need to know the sentencing patterns of your judge. If your attorney cannot explain your judge’s sentencing patterns well in advance of trial, seek a second opinion from a local attorney.

Given the harsh consequences of refusing a chemical test, why is it ever a good idea to refuse? Two reasons. First, if you were somewhat over the legal limit, refusing a test will keep your options open until you know who your judge is. If your case is assigned to a judge who does not harshly punish guilty verdicts at trial, it may make sense to try your case and hope for an acquittal. You can’t know who your judge will be while you are on the shoulder of a highway, so it may be best to keep your options open until you discuss things with your attorney. Second, if you were significantly over the legal limit, you don’t want to give the prosecution more ammunition. Few things incense judges and prosecutors like really high chemical test results. An “ugly” test significantly increases your jail time and will inspire more court-ordered alcohol treatment than in a “garden variety” case. A defendant who politely refuses a test will usually come out better than a defendant whose test produces a memorable result.